It has been a year since the acquisition of Exeter Medical and with the site being close in location to Mount Stuart Hospital it has created opportunities for staff at both facilities. A number of staff have grasped the opportunity to advance their careers, which has also created scope for succession planning.

Alongside leadership changes, theatre staffs are now working collaboratively across both units so as to support with and share skills. Last month Cornel Pistorius, new Theatre Manager, Silvia Bertinotti, Surgical First Assistant and Terri Artus all from Mount Stuart Hospital, provided surgical support to Exeter Medical so as to prevent cancellation of lists.

Team members that have extended their roles and responsibilities over both sites include; Ken Quelch, Maintenance/Engineer, Carla Forbes, GP Liaison, Jonathan Miles, Supplies Assistant, Charlotte Thorne, Pharmacist, Ema Proctor who now encompasses all of the Operations Manager role and Joanne Flackett who has become Assistant Accountant due to support given by Ramsay to gain accountancy qualifications, alongside her current role of Business Administration Manager at Mount Stuart Hospital.

As a result of these changes, new opportunities have arisen as Chloe Keen, who commenced as an apprentice at Exeter Medical is trialling Administration Support in the HR Office at Mount Stuart, following merging of the PA/HR departments, and Daniel Conway has joined the team as Engineer apprentice.

Jeanette Mercer, Hospital Director said “I am truly delighted to see so many staff being recognised for their talents and embracing the opportunity to develop their careers. A huge well done to all those named and the many others who have contributed to these fabulous achievements.” 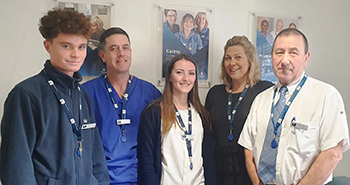